AUD/NZD Likely to Test Key Support Near 1.0690 Amid Forecast of Improving Trade Balance in New Zealand

On Tuesday, at GMT 2:30 p.m., the Conference Board Inc will release the month-over-month leading index for Australia. It measures the changes in the level of a composite index based seven other major fundamental indicators.

The CB leading index aggregates some of the other indicator data. So, binary options traders consider this to be an important representation of the overall Australian economy. However, since most of these data are previously released, the CB leading index tends to have a minimized immediate market impact.

Last month, the CB leading index came out at -0.2%. If the negative trend continues, it will have a bearish effect on the Australian Dollar.

On Tuesday, at GMT 9:45 p.m., the Statistics New Zealand released the national trade balance figure. It measures the difference of the value between net import and net export of the country during the previous month.

The export of a country is directly correlated to the demand for its currency. So, a positive trade balance figure indicates that foreigners had to buy more local (NZD) currency in exchange of their domestic currency. Hence, economists and binary options investors consider the trade balance to be an important indicator of the health of the New Zealand’s economy.

Last month, the trade balance figure of New Zealand came out at – 1565 million. This month, the analysts are expecting it to come out slightly better, at – 1375 million. 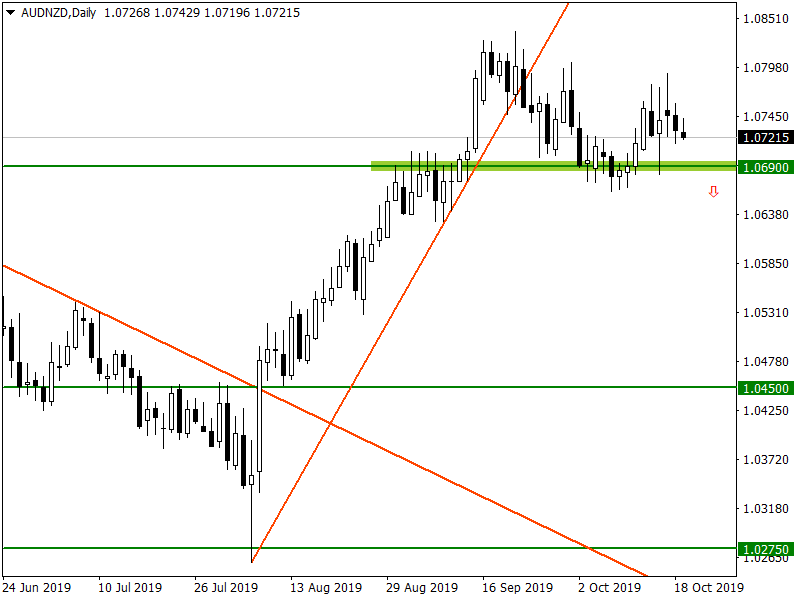 The AUD/NZD formed a large bullish pin bar on August 6. Since then, it remained in a strong uptrend. Over the last few months, it climbed up by around 570 pips. However, on September 23, the AUD/NZD broke below the downtrend line. Soon, it found support near the 1.0690 level. Currently, it is once again approaching the support near the 1.0690 level.

The Australian CB Leading Index went down by -0.2% last month and it will likely remain negative this month. On the other hand, analysts are expecting the Trade Balance in New Zealand to improve slightly to -1375 million.  We believe it would set a bearish fundamental outlook for the AUD/NZD this week. Therefore, if the AUD/NZD closes below the support near 1.0690, it would likely attract additional bearish momentum in the market.

Hence, Australian binary options traders should look out for trading opportunities below this major support level around 1.0690.