On Tuesday, at GMT 9:00 a.m., the Zentrum fur Europaische Wirtschaftsforschung (ZEW) released its German economic sentiment index. It measures the level of a diffusion index based on surveying 275 German institutional investors and market analysts.

The professional investment community, investors, and analysts have the latest data. Their reflection about the economy tends to be the most accurate. Therefore, binary options investors consider the ZEW’s German economic sentiment index to be a leading indicator of the entire Eurozone economy. This is because the German economy is one the most important driving forces behind the Euro currency.

Last month, the ZEW German economic sentiment came out at -22.5. This month, analysts are expecting it to come out at -27.0.

On Thursday, at GMT 12:30 a.m., the Australian Bureau of Statistics will release the national unemployment rate. It measures the percentage of total work force which remained unemployed over the past month.

Binary options traders consider the unemployment rate to be one of the most important fundamental indicators of the Australian economy. Because one of the main goals of the Reserve Bank of Australia is to keep the unemployment as low as possible. This is a lagging indicator. But, analyzing this data can help Forex traders predict future interest rates. Also, it can help forecast inflation situation in the country.

Last month, the unemployment rate in Australia came out at 5.3%. This month, analysts are expecting it to remain unchanged at 5.3%. 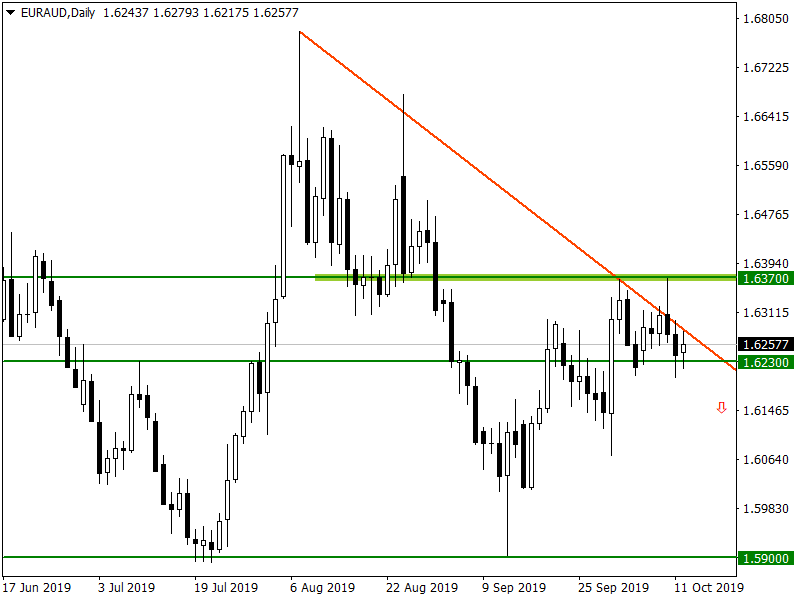 The EUR/AUD formed a large bearish pin bar on August 7, 2019. Since then, it remained in a strong downtrend. Consequently, it fell by around 870 pips over the last two months. Last week, the EUR/AUD broke above the long-term downtrend line. However, it soon found resistance near the 1.6370 level. Currently, it is trading between the range of 1.6230 and 1.6370.

The Australian unemployment rate will likely remain unchanged at 5.3%. On the other hand, analysts are expecting the Eurozone German ZEW Economic Sentiment to fall further and come at -27.0. We believe it would set a bearish fundamental outlook for the EUR/AUD this week. Therefore, if the EUR/AUD closes below the support near 1.6230, it would likely attract additional bearish momentum in the market.

Hence, Australian binary options traders should look out for trading opportunities below this major support level around 1.6230.