Bitcoin plunged again on Monday after the losses it suffered last week, causing the currency to lose 10.45% in one day and test the $ 42,000 level, then rebound higher to trade around the $ 44,000 level.

As is usual in the crypto market, the performance of Bitcoin determines the direction most alternative currencies will take, and as a result, all currencies in the list of the top ten leading cryptocurrencies have fallen, with the exception of Ripple and USDT.

These losses come after Tesla CEO Elon Musk retreated from his previous efforts to accept Bitcoin as a future payment method for his products. Musk pointed to environmental concerns about mining the leading currency, and this may mean a possible reversal from his previous decisions that were strongly supportive of cryptocurrencies, while Some analysts view Musk as a currency manipulator, describing him as a fraudster.

Heavy losses within a month 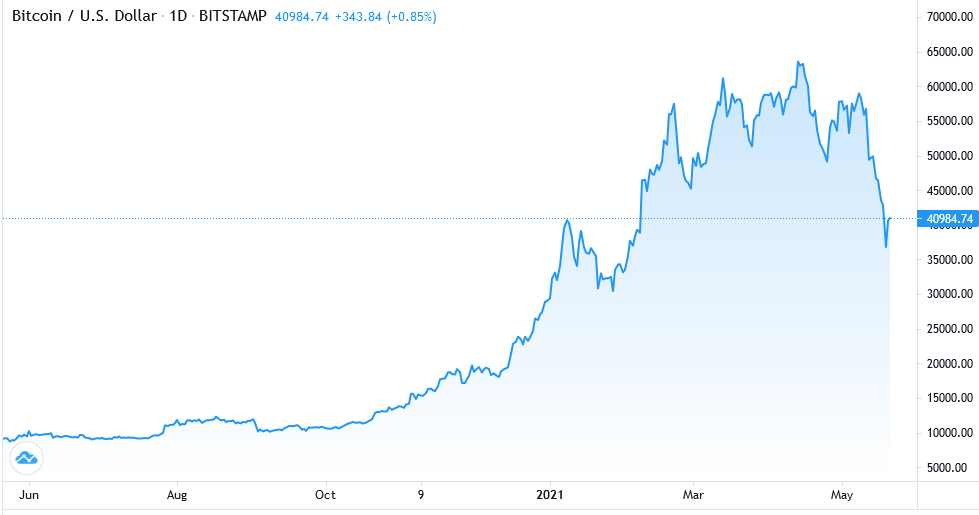 Since October 2020, the Bitcoin currency continues a series of bullish gains, during which it recorded records, the last of which was on April 14, when the currency recorded its highest level ever at $ 64,863.10, amid strong bullish expectations that its momentum will continue until the end of the year.

While the currency struggled to maintain this bullish momentum, it quickly made a sharp downward correction and traded above $ 50,000 for a few days, before dropping below it and trading at as low as $ 47714.66.

The announcement by Tesla, the leader in the electric car industry, was earlier that it would start accepting Bitcoin as a payment method from the main bullish drivers of the currency in the first quarter of this year, and that also supported the statements of its CEO, Elon Musk, that the company has invested about $ 1.5 billion in bitcoin. Which encouraged a lot of big companies to go ahead with Tesla’s approach and invest in cryptocurrencies, as they were wary of being left behind.

Musk’s recent comments to back down on Bitcoin support are based on the belief that cryptocurrency mining relies on fossil fuels, while many mocked Musk’s tweets citing the extent of discrepancies in Tesla battery production.

CoinShares released a report on May 17 stating that Bitcoin lost $ 98 million and that this money was solely from Bitcoin investment products, and the outflow reportedly represented 0.2% of assets under management.

According to the report, all other digital investment products recorded inflows totaling $ 48 million. As such, the company concluded that investors are diversifying their portfolios by investing in digital currencies with upcoming developments such as Cardano (ADA) and Polkadot (DOT) with inflows. They amount to $ 6 million and $ 3.3 million, respectively.

Bitcoin faces a very important week, can it recover and defend the recent drop in prices ?, The bull market is in danger, Musk’s recent comments may reduce corporate flows to the crypto market.