Home Forecasts Bitcoin is back near the $ 60,000 level after more positive events

Bitcoin is back near the $ 60,000 level after more positive events

Bitcoin has gained about 6.5% this week after a short correction over the past two weeks, as it approaches the $ 60,000 level following much positive news coming from major financial institutions.

The benchmark is trying to gain more bullish momentum on its way to the next resistance target of $ 65,000.

Goldman Sachs is the latest in Bitcoin embrace

Goldman Sachs has become the latest major financial player to enter the cryptosystem, and one of the world’s largest investment banks has said it will begin offering Bitcoin and other digital assets to its clients to meet the growing demand.

The head of the bank’s global digital assets, Mary Rich, said in an interview this week that the bank is working hard in cooperation with a specialized team to explore and find appropriate ways to provide an appropriate and thoughtful way to enter the encryption system and provide it to private wealth clients, and this is likely to be revealed soon. Rich added that the bank is receiving a very high demand for crypto assets. 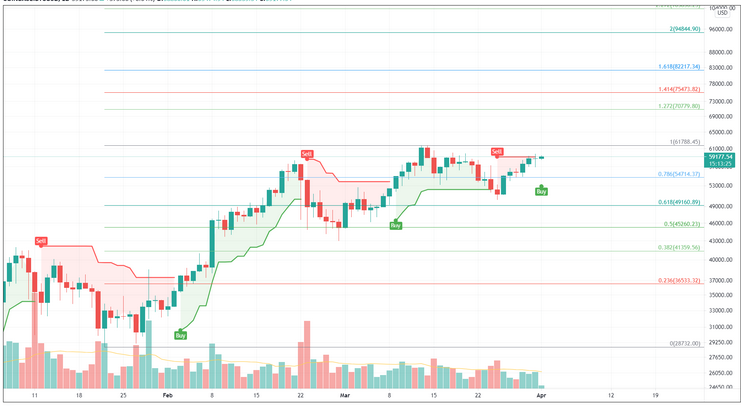 They see it as a good way to hedge against inflation risks, as the overall background over the past year has definitely played a role in that, and Mary Rich said that many people have come to see that we are witnessing a new digital era. That is why they are looking for ways to participate in digital currencies.

Last Monday, Visa announced that it would allow users to settle transactions using cryptocurrency in the US dollar on its payment network, confirming the increasing mainstream acceptance of digital currencies.

Visa launched the beta program in conjunction with crypto and payment platform Crypro.com and said it plans to offer the option to other partners later, too, in 2021.

The move comes after a number of major companies, including MasterCard, Tesla, and BNY Mellon, announced their support or investment in cryptocurrencies. Only last week, the electric car giant Tesla announced that its customers are now able to buy Tesla cars using currency. Bitcoin.

Previously, a customer who wanted to buy something with a Visa Crypto.com card had to convert the digital currency into paper money, said Coy Sheffield, head of Visa’s digital assets sector.

Visa news immediately sent the entire cryptocurrency market higher, with bitcoin rising more than 4% on Monday to trade above the $ 58,000 mark, and traders buying bitcoin are hoping for another bullish journey to reach new highs.