Home Forecasts Bitcoin is rising again with expectations of reaching the $60,000 level

Bitcoin is rising again with expectations of reaching the $60,000 level

Bitcoin made a strong performance today, Thursday, after reaching its highest level near $ 57,000, rising by more than 11% since last week’s trading, in a sign that investor demand for digital assets is still strong, and markets are awaiting a re-test of the currency at all-time highs. 58,300 dollars.

Bitcoin, which is the largest digital currency by market value, continues to achieve record highs apparently on a daily basis, it is likely that institutional investors will play a vital role in this rally because the prevailing assertion is that the digital currency is attracting more and more companies from the big names. 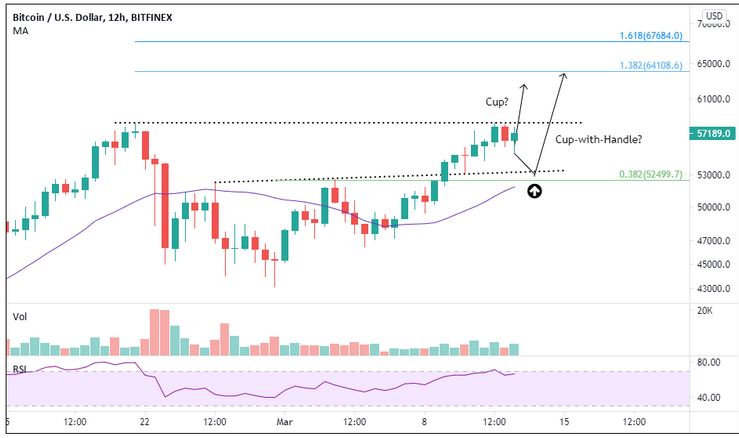 Goldman Sachs President John Waldron said on Wednesday that he has seen an increase in interest from its customers when it comes to investing in the leading digital currency, and also added that the bank will discuss with regulators how banks can handle digital assets in the future.

Banks are currently betting on Bitcoin

The supply of bitcoin is dwindling at the moment as institutional investors buy-in, and many retail investors hold the cryptocurrency for longer periods of time.

Particular interest in increasing institutional investment is seen in Asia, as China is working to offer a state-backed cryptocurrency with the help of major players in the private industry.

The leading cryptocurrency has become an asset that captures great global interest, especially after some large investors and high-level companies moved to invest in it in light of low global interest rates and central banks’ devaluation of fiat currencies.

Is there more height?

The cryptocurrency market has risen since the beginning of the year, driven by strong gains in bitcoin, although there are many reasons that supported the currency, the announcement of the electric car giant Tesla to buy $ 1.5 billion of the digital currency was one of the main drivers in its price. Tesla is the latest company to invest in the largest cryptocurrency in the world for its balance sheet and is currently the most well-known company to do so.

The recent sell-off of the leading digital currency came as investors avoided buying so-called “risky assets” after rising bond yields, investors were fearful that rising inflation would lead to higher government borrowing costs as Bitcoin slipped in the sell-off.

The price has now risen again above $ 50,000 to approach a record high above $ 58,000 recorded in February, this week is likely to be crucial for the currency’s price because it will ultimately depend on action at an all-time high.