Bitcoin continues to fluctuate around the $50,000 level as it fell today to trade around the $46,700 range, and over the course of this week the leading cryptocurrency is trying to surpass the $50,000 psychological support level that it crossed last weekend, but so far it has failed to break it, in light of the decline in investor sentiment towards The crypto market, after global central banks headed towards tightening monetary policy and rising interest rates, in order to control the rising inflation rate.

This week, Bitcoin failed to chart any significant gains and fell 2.4%, despite the US raising the debt ceiling and leaving interest rates unchanged. Another seven days have passed, and unfortunately, no better than the previous week, the cryptocurrency and cryptocurrency markets are deteriorating, Despite the Federal Reserve leaving rates unchanged and increasing the country’s debt ceiling by $2.5 trillion. 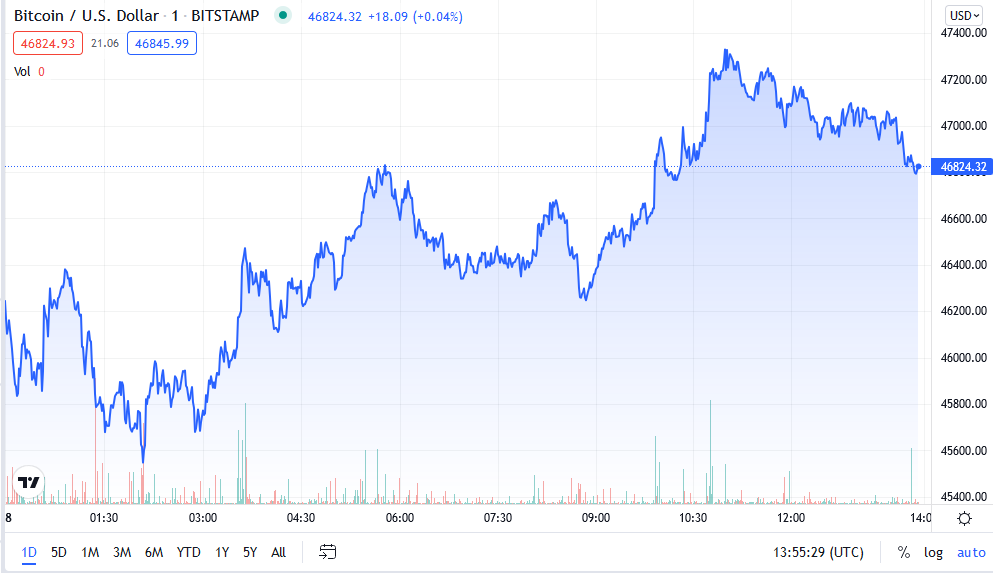 Bitcoin was heading towards the green at the end of last week when the price crossed $50,000 on Sunday. This gave the market some respite and brought hope that it was time for a rebound, but the markets turned in the opposite direction, turning everything in the red, on Monday it fell The leading digital currency has reached nearly $46,000.

On December 14 and 15 the Federal Reserve held a meeting, and Congress voted again to increase the country’s debt ceiling while leaving rates unchanged. Briefly, the cryptocurrency is trending lower again, and Bitcoin is trading at around $46,500, down 2.4% in the past seven days.

Global markets have also fallen over the past five days as the Nasdaq Composite Index is down 2.5% while the S&P 500 is down 1.2%.

The altcoin market is also deep in the red, Bitcoin has fared better than many altcoins, with Ethereum down 7.6% and BNB down 8.4%.

It is still interesting to see how the market will turn out over the coming days as the Christmas season enters, which is historically bullish for Bitcoin.

One market expert says that macroeconomic concerns such as inflation and the monetary policies of the Federal Reserve are causing some cryptocurrencies to sell-off.

For example Last Friday, the Bureau of Labor Statistics reported that the Wholesale Price Index rose 9.6% during the month of November, marking the largest increase since the 1980s.

While Bitcoin was jumping between 3% and 4% before the announcement, the asset has fallen more than 7% since then, moreover, the leading cryptocurrency is trading 30% below its all-time high in mid-November, an indication that Investors are becoming more and more afraid of Bitcoin as a hedge against inflation.

Meanwhile, the Federal Reserve indicated that it will expedite the termination of the asset purchase program, which is likely to cause another liquidity crisis for cryptocurrencies.

The macroeconomic concerns he mentioned earlier seem to be pushing investors towards stable coins and other less volatile crypto assets.

According to trading data, stable coin conversion volumes increased by a combined $57 billion on Tuesday from $10 billion to $20 billion, which are assets of normal daily volume, so the conversion volume could create more opportunities for investors looking to buy the dip.