Home Forecasts Bitcoin faces a downward correction that pushes it below the $19,000 level

Bitcoin faces a downward correction that pushes it below the $19,000 level

Bitcoin is struggling between the strong buying and selling, as the currency tries to reach the $20,000 level but fails, at the same time controlling the downward corrections pushing it just below the $19,000 support level, to currently online trading above the $ 18900 level.

During yesterday’s trading, the standard cryptocurrency recorded its highest level ever at $ 19,870, but quickly showed signs of a correction, to decline by up to 7.74%, while maintaining the $19,000 level as temporary support for the next path up to $20,000 and beyond. 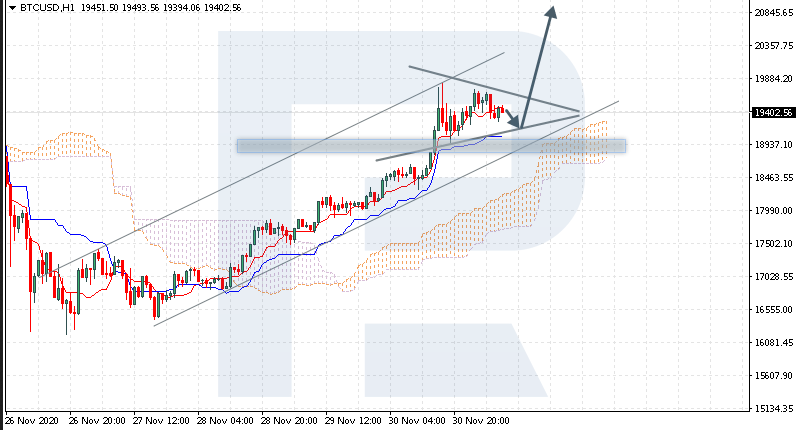 The currency’s bullish momentum was halted yesterday when it set its all-time highs on several different exchanges, and this happened after a rebound from the lows of $ 16,200 which had been set just a few days ago.

The strength that the currency has experienced since its plunge to these lows is a positive sign, but the overnight rejection at just under $ 20,000 illustrates the severity of the resistance level in this area. Multiple indicators of a decline in the neutral zone.

Prospects are increasing that Bitcoin will reach another record level that will be the highest ever due to the fundamentals of the economy supporting the currency, as the currency has faced great interest from individual and institutional investors in the recent period, especially in light of the significant decline of the US dollar with the monetary policies of global central banks that led to the devaluation Paper currency.

Initially, billionaire investor Paul Tudor Jones in May allocated between 1% to 3% of his $ 22 billion portfolios to invest in Bitcoin futures contracts. In August, MicroStrategy, a software company, announced that it had bought Bitcoin by the equivalent of 250. $ 1 million in its cash reserves, then invested about $ 175 million again in Bitcoin during October 2020.

In October, Square, a global payments company, also announced that it had bought Bitcoin for the equivalent of $ 50 million, and at the same time, PayPal, Square’s biggest competitor, announced that it provided crypto services to its customers, allowing the buying and selling of Bitcoin and other cryptocurrencies on its platforms, Which greatly supported the cryptocurrency.

The increasing institutionalization of Bitcoin has given it the reliability of being a store of value, especially in light of the world’s tensions, and this may confirm the validity of the cryptocurrency’s competition for gold.

To be sure, many rookie investors still expect both gold and bitcoin to rise further, as long as central banks around the world continue to print money to inject liquidity into their virus-affected economies, in the meantime, the Fed will commit to keeping interest rates close to Zero and buy government bonds.

This mainly drives investors to move their capital from debt and poor-yielding monetary instruments to safe havens like gold and bitcoin.