Bitcoin is looking to re-test the highest levels ever

In an important step added to the tremendous rise of the Bitcoin currency, its prices touched the level of 19,400 dollars during late trading on Tuesday, November 24, so the currency stood only 3% away from its peak of 20 thousand dollars, which came in December 2017, nearly three years ago.

Since then, the asset has fallen sharply, down by $ 700 to $ 18700, and then returned to trade on Wednesday sideways between the $ 18700-$ 18900 range, and with momentum continuing in its favor, analysts and investors are looking for the next potential peak.

A record high since the Great Crash

The arrival of the Coronavirus pandemic was the worst thing that happened at the beginning for every market, including cryptocurrencies, as the price of Bitcoin fell by more than 60% in just two days of trading during March 2020, and its decline coincided with a collapse throughout the global financial market.

Later, central banks reacted by lowering benchmark lending rates, along with programs that buy government and corporate debt indefinitely. False quantitative easing that followed governments ’decision to spend trillions of dollars on welfare programs doubled the purchasing power of the US dollar. 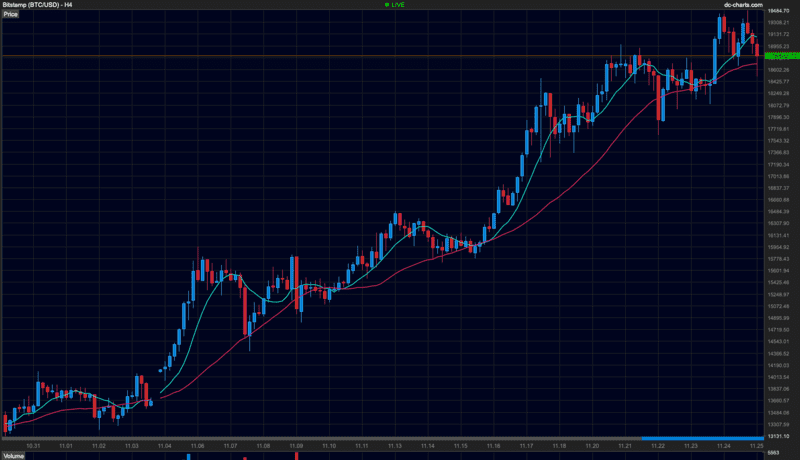 The decline in the US currency and negative-yielding debt prompted investors to seek profits from scarce assets, which led to a massive rebound in Bitcoin, between March and now the leading cryptocurrency rose by more than 350%, reaching above $ 19,000 for the first time since December 2017.

But the prospects for global economic recovery are improving, as the past two weeks have witnessed three global pharmaceutical companies, each separately, announcing that the vaccine has had their own Coronavirus, and each claim that the effectiveness of the vaccine is at least 90 percent, and that positive news caused a greater decline in gold. A competitor to Bitcoin for two weeks in a row.

Surprisingly, Bitcoin itself has not moved down, supported by its booming adoption from fintech companies such as PayPal and Square, experts believe that the main reason Bitcoin continues its impressive gains is the market’s desire to retest the $ 20,000 level, the highest bitcoin’s record yet. Speculative bullish bets kept higher in both the spot markets and derivatives.

Coronavirus vaccines do not promise to change policies

Analysts say that investors’ resorting to Bitcoin came as a result of their belief in its ability to protect their portfolios from the risks of a depreciating dollar and high inflation, and it is likely that the reason for MicroStrategy, a company listed on the Nasdaq Stock Exchange, replaced its cash reserves of $ 425 million in bitcoin is the same thing because the vaccine Coronavirus does not promise to change current monetary and fiscal policies.

The Fed Funds Futures Curve predicts the next interest rate hike in 2023, meanwhile, the 10-year US inflation penetration rate is showing a sustained upward trend, indicating that the market is waiting for inflation to rise.

In short, the damage to the economy during the lockdown period will take more time to heal, the vaccine not only speeds up the recovery but also tends to increase inflation as people return to their lives before the epidemic, and during that period all eyes are on Bitcoin, which will allow more institutions and investors. By exchanging their cash holdings for cryptocurrency.