Bitcoin enters a new price stage after breaching the $28,000 level

Bitcoin price-performance was excellent during the past week, especially during the weekend following Christmas, as the currency managed to reach the level of 28 thousand dollars and surpassed it, recording its highest levels in all for a while, then entered a short-term downward corrective phase, resuming the recovery to reach today higher. Levels again in a short period, amid strong prospects to continue its upward trend and soon reach the $30,000 level. 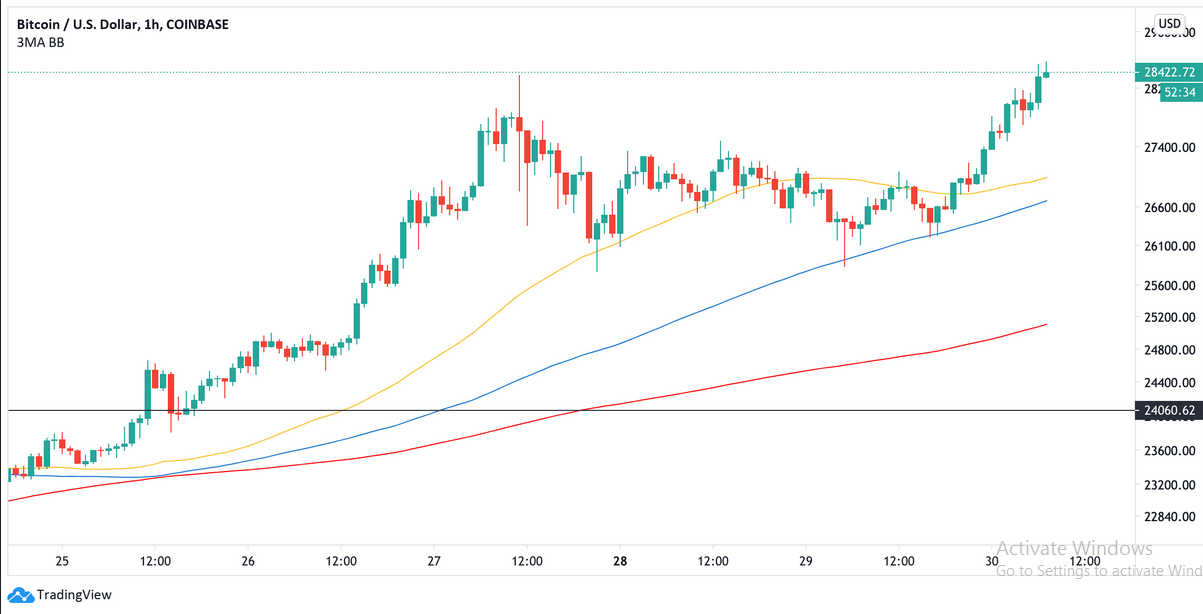 The price of Bitcoin has witnessed tremendous growth during the past two weeks, as the cryptocurrency reached a new record high, to advance further after a short correction, and it reached its latest level at $ 28,600. It is possible to rise The leading digital currency once again and reach a new level before the arrival of 2021.

During the past week, Bitcoin witnessed tremendous price growth, most of which occurred on the weekend immediately after Christmas. As soon as the holiday ended, the currency “which was trading in a narrow range for a few days” began to rise with tremendous force, so it was able to add about 4000 dollars to its price, This allowed it to climb ever higher and cross the next psychological barrier of $ 25,000, $ 26,000 and $ 27,000.

This indicates that the growing demand rates are increasing, the cryptocurrency is still being bought at an incredible price, its daily turnover exceeds about $ 65.7 billion, and its market value has recently exceeded $ 500 billion. surpassing the market value of giant companies such as Mastercard, Samsung, Walmart, and even Visa.

Meanwhile, some warned that regulators would have difficulty dealing with Bitcoin, while others questioned the possibility of currency exchange and advised Bitcoin investors to sell as soon as possible, while supporters responded to those estimates, saying that the sudden rise in The currency rate is bound to attract regulators.

Bitcoin derivatives rose at their highest level than ever before, and even some June futures predicted a price of $ 30,000 per coin, and of course, after Bitcoin has already reached $ 28,000, that price will likely be reached in Much sooner than June.

There is clearly a large supply shock resulting from the massive demand from institutional investors, and currency scarcity ensures that prices will continue to grow if demand remains unchanged.

Bitcoin has the potential to reach $ 50,000 by the end of the first quarter of 2021, and the rally to $ 80,000 by the end of June. Historically, the summer may bring a correction or more sideways trading, but in general, the upward trend is expected to continue as the year approaches.