Factors contributing to the continuation of the Bitcoin recovery journey

Bitcoin has been a major topic of discussion over the past few months. It has seen huge rises and crashes but ultimately provided countless opportunities for investors to make profits. As always, traders are looking for more information about the currency’s price, which can be revealed through Bitcoin. Its weekly performance says a lot.

The last few days have not been anything special concerting the Bitcoin price, as it is still hovering between $ 35,000 and $ 38,500. However, the highlight in the past period was the news related to the currency which paved the way for a potential growing bullish momentum in the coming days. 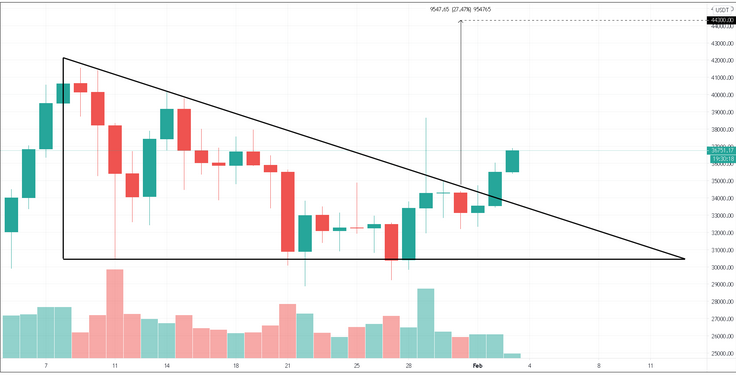 Yesterday, cryptocurrency exchanges saw a spike in stable currency deposits, instilling hopes that traders will use the premium cryptocurrencies pegged to the dollar to buy bitcoin.
Data shows that stable currency reserves in stock exchanges reached a record level of 5.47 billion after adding $600 million. The frighteningly sudden rise coincided with a modest upward movement in the leading digital currency, which rose by 3%.

The latest gains came as part of the broader recovery movement that saw Bitcoin recover from its January low of $28,732.Before that, the digital currency collapsed by nearly 30% from its record highs near $42,000.
Analysts now see the current rally as a bullish continuation setup, as the asset will resume its uptrend after a period of consolidation.

Elon Musk declares that he is officially a supporter of Bitcoin

This is great news for the leading digital currency, as Elon Musk is not only the CEO of Tesla and SpaceX and the richest man in the world but he is also the most famous billionaire. Therefore, his official pro-bitcoin announcement is a major step for the currency and the crypto industry as a whole.
During the past months, Musk has been tweeting in a positive way towards cryptocurrencies, but this time he publicly stated that he is a supporter of the leading cryptocurrency, and even put bitcoin in his Twitter resume.

Another piece of major news for digital currencies is that Visa may add support for cryptocurrency trading. According to its CEO’s recent statement, Alfred Kelly said that Visa has a global presence and is a trusted brand, and with the increasing use of cryptocurrencies in payments, it is natural for Visa to take advantage of this. Of course, if this happens, then Bitcoin is likely to be one of the first currencies to be supported.

So far, no one knows about the future of regulations towards the leading cryptocurrency under the new US administration led by Badin, but it seems that the majority of investors and institutions working in crypto are optimistic, given the strong institutional demand that regulators are likely to have to pass laws or that they risk greater disruption. For conventional financing, especially since companies such as Levante, Paul Tudor Jones, Skybridge, and others are present in this growing market.

Analysts are still speculating that the price of Bitcoin could reach $ 600,000 and that the cryptocurrency will eventually steal part of the market value of gold to reach higher valuations, as many investors are currently looking at both of them as hedge assets against inflation.