Oil prices fell during the trading session today in the European market, approaching the recording of its first daily losses during the last three sessions.

This comes amid following up on the developments of Hurricane Ida, which struck the Gulf of Mexico region in the United States and caused the suspension of production of about 1.75 million barrels of US crude. 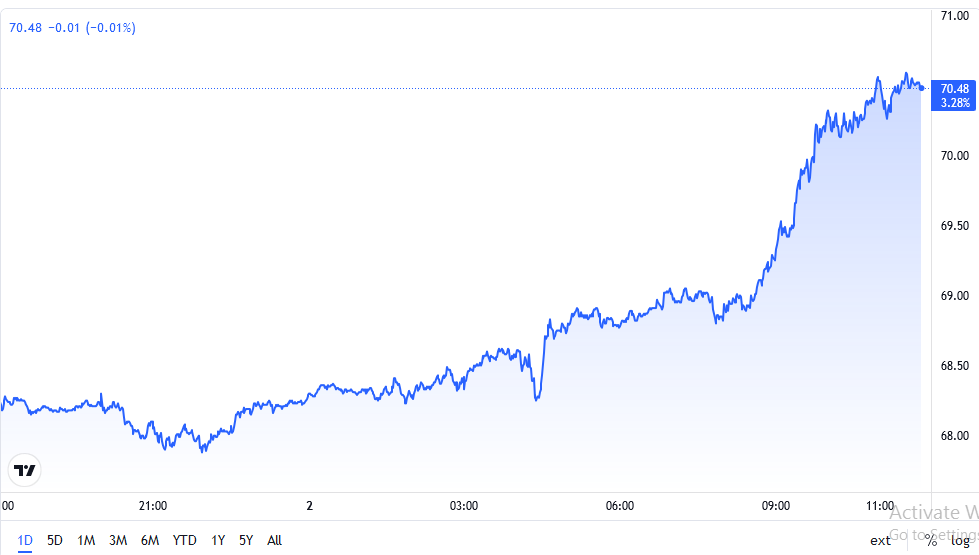 The international crude oil “Brent crude” also decreased by 2.7 percent to the level of $71.42, compared to the opening level at $73.38, and recorded early in the session the highest price at $73.46 a barrel.

At the conclusion of yesterday’s trading, US crude managed to rise by 0.7%, in the second daily gain in a row, recording its highest level in four weeks at $69.60 a barrel. The benchmark Brent crude also rose by 0.8%, recording the level of $73.67 a barrel, the highest since the third of the year. This August.

The global markets are following the developments of Hurricane Ida, which hit the southeastern regions of the United States, causing disruption to airports and trains, power outages, and stopping oil production in the Gulf of Mexico.

Until Sunday, energy companies in the Gulf of Mexico had taken a decision to stop more than 95% of their production capacity, or the equivalent of 1.75 million barrels per day, after Hurricane Ida headed towards the exploration platforms in the region.

Within 12 hours of reaching the coast, the hurricane had weakened to a Category 1 tropical storm, much paving the way for the return of operations in the largest oil-producing region in the United States.

The production of the Gulf region in Mexico constitutes about 17% of the total US production of crude, which is currently 11.4 million barrels.

The Organization of the Petroleum Exporting Countries and other major producers including Russia, a group known as OPEC+, are likely to agree to press ahead with plans to add an additional 400,000 barrels per day to supply each month from December.