Home Forecasts Bitcoin is slipping to $10,000 level on huge fears of continuing its decline

Bitcoin is slipping to $10,000 level on huge fears of continuing its decline

The end of last week was very difficult for most cryptocurrency investors as there were widespread sell-offs, Bitcoin price fell below $10,000 several times but it appears to have found short-term support at this level.

Bitcoin has seen major changes in its performance on CFD crypto platforms as it incurred more than 15% losses from the $12,050 level to bounce at $9,900 and then rebound above $ 10,000, the price is currently trading well above $10,200 and is likely to continue rising as long as it is above its 10,000 support zone.

The psychological barrier at $10,000 currently acts as a support zone, suggesting that support for short-term retracements may be on the horizon, and the apparent collapse of the $11,200 area has led to a broad sell-off across the markets. 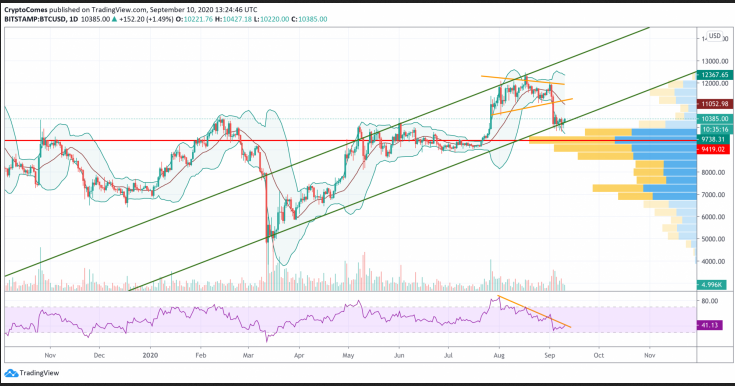 Before Bitcoin fell to support $10,000 it traded at $12,050, later it fell to $9,900 and the price was corrected above $10,000, amid fresh concerns among Bitcoin investors about the strength of the US dollar index and monetary policy in Europe.

Some believe that the strength of the US dollar and its noticeable recovery from the lowest levels in more than two years that it recorded in earlier trading, in addition to the growing concerns about the continuation of the expansionary monetary policy in Europe were among the main reasons for the intensive selling of the US currency.

Bitcoin is linked to stocks

The decline in bitcoin prices also appeared alongside the traditional markets, for example, futures contracts linked to the S&P 500 fell by 0.53% and the Nasdaq Composite also fell.

Bitcoin and US stocks have formed a strange relationship since the defeat of the major global market in March 2020, and traders who suffered losses in stocks were able to collect cash by selling any profitable assets they were holding at the time.

Analysts see that the markets are ready to repeat what happened earlier in the current September 2020, as they say, that there was no clear reason for the decline in US stocks, and they also noted that the majority of companies, especially companies that focus on technology, were trading at high levels of their actual multiples. Profits maybe that. It may have caused a short-term bearish correction.

Meanwhile, Bitcoin, which was trading 200% higher than its mid-March low, may have been affected by a plunge in technology stocks that ultimately pushed the value of the US dollar up.

In the coming weeks, investors should be aware of movements in the stock market to determine the expected behaviour of bitcoin and the cryptocurrency markets in general.