Cryptocurrency continues to decline due to regulatory processes in China

After the recent negative developments in the cryptocurrency market sparked by more regulatory efforts by China over the weekend, Bitcoin began to gradually recover starting Monday (May 24) after falling on Saturday evening (May 29) to $34,400.

The leading cryptocurrency continued to rise and jumped to $40,000 during trading on Wednesday to record its highest daily level of $41,000, however, it failed to maintain the bullish momentum and began to correct soon after.

First, it fell below $40,000 amid recent reports that Iran banned Bitcoin mining until September 22, before the energy consumption season, and the currency continued to decline, reaching $34,400 on Saturday (May 29). 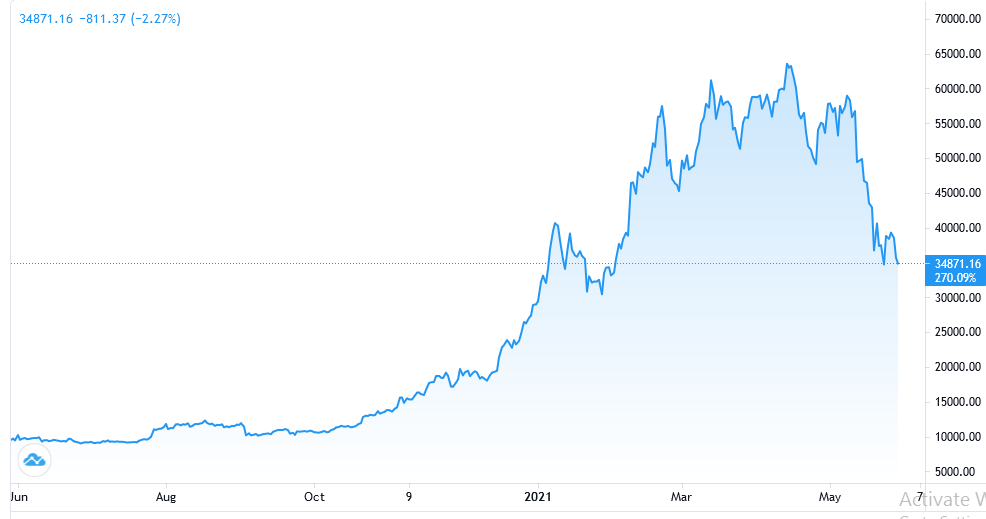 The total market value of all digital currencies decreased by $100 billion yesterday to $1.7 trillion after Bitcoin fell below $40,000 and other alternative currencies failed to increase further.

Bitcoin is currently experiencing a high level of volatility following Tesla’s fossil fuel concerns, and despite the major correction the currency has undergone, some market analysts believe that the leading currency will continue to rise, reaching $100,000 before the end of the year, based on the nature of the cryptocurrency. It was always very volatile, so it’s no surprise that It’s tumbling hard.

The leading cryptocurrency fell to $30,000 on May 19, posting a drop of more than 50% during the month, and despite a slight correction, the cryptocurrency is still at a downward level.

The previous bullish circle of Bitcoin did not witness a correction of up to 50%, this makes it a bit difficult to believe that the cryptocurrency will bounce to a new all-time high soon.

Although Bitcoin is still far from hitting the $100,000 target, it did exceptionally well when it was trading at $65,000 simultaneously in the market.

But the cryptocurrency failed to surpass this mark and is currently struggling to climb $40,000. Bitcoin has been very volatile over the past two weeks, struggling against many market forces and also facing a lot of challenges recently. It started with Tesla’s recent concern about the increased use of fossil fuels for mining. Soon after, China stepped up regulatory efforts on cryptocurrencies, and this contributed to the volatility of the world’s most valuable digital currency.

Bitcoin mining has received a violent response recently as it has been pointed out the extent of its danger to the environment, with both “Elon Musk” and Michael Saylor saying that they have engaged northern miners to discuss further measures, and miners have formed a council to promote transparency in energy use around the world.

Earlier this month, Tesla announced its decision to suspend Bitcoin payments for its products, with the electric carmaker citing environmental concerns because the mining process uses many fossil fuels.

However, CEO Elon Musk recently said that he had discussed with CEOs of bitcoin mining companies in North America to move forward with the deployment of existing and planned renewable use.