On Monday, at GMT 9:30 p.m., the Australian Bureau of Statistics released the national month-over-month building approvals figure. It measures the changes in the number of approvals of new buildings.

A building permit indicates new construction work. It also suggests that there would be additional positive economic activities. For example, new jobs would be created for construction workers. Therefore, Forex traders consider this data regarding new building approvals to be a leading indicator of the overall economic health of the country.

Last month, the building approvals figure decreased by -5.5%. This month, the forecast was set at -5.0% growth. However, the actual figure came out way lower, at -8.6%.

On Wednesday, at GMT 8:15 a.m., Automatic Data Processing, Inc. (ADP) released its version of the US Non-Farm Employment Change figure.  The employment change figure estimates the changes in the number of employed people during the previous month in the US economy.

Automatic Data Processing, Inc., a private company based in the US, provides payroll services to various corporations in the country. Hence, they have access to employment data from around 400,000 consumers. They use their internal data to forecast employment growth estimates in the economy. Therefore, CFD traders consider this to be a leading economic indicator of the US economy. 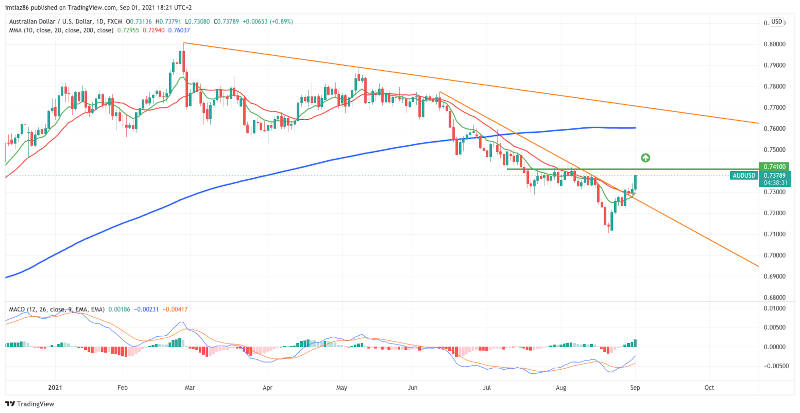 The AUD/USD remained bearish since the end of February 2021. Over the last few months, it fell by around 11.25% or 900 pips. But after dropping to 0.7105 on August 20, it started a bullish retracement. Over the last two weeks, it has gone up considerably and now approaching the resistance near the 0.7410 level.

The Australian building approvals fell by -8.6%. However, the US ADP Non-Farm Employment Change figure came out way below the forecast of 640K and dropped to 374K. We believe it would set a bullish fundamental outlook for the AUD/USD this week. Therefore, if the AUD/USD closes above the resistance near 0.7410, it would likely attract additional bullish momentum in the market.

Hence, CFD traders should look out for trading opportunities above this major resistance level around 0.7410.