EURUSD falls after inflation data in the United States

EURUSD witnessed a decline on Wednesday morning in the European market and recorded the first daily decline. This comes with the recovery of the US dollar and the increasing demand for buying it as the best safe and alternative investment at the present time, following the announcement of inflation data. 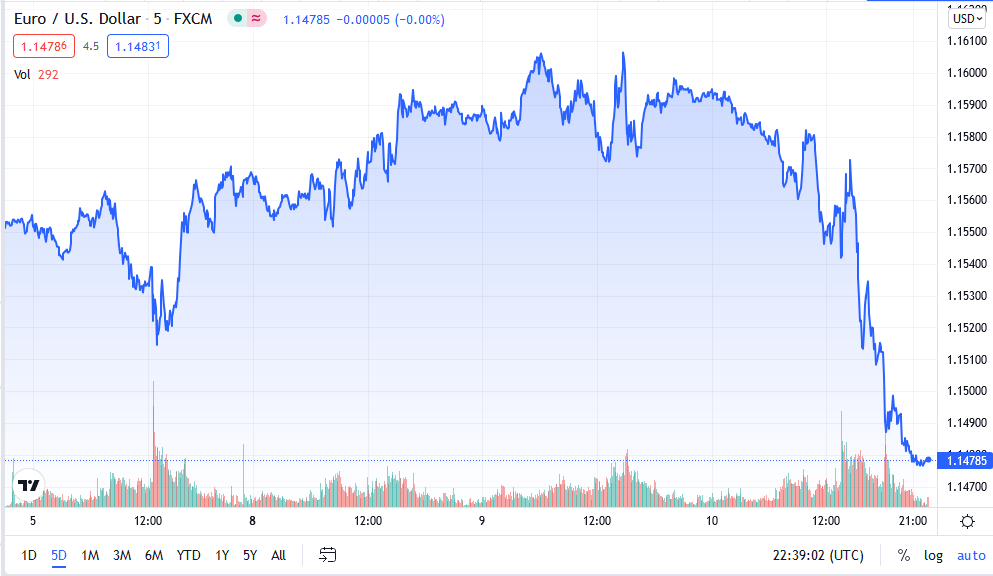 The EURUSD pair traded at the level of $1.1557, losing about 0.3% from the opening level of today’s session at $1.1593, and it closed yesterday’s trading with gains of less than 0.1% against the US dollar for the third consecutive day, thanks to weak data that came less than expected on US producer price index.

The US dollar index tilted to the upside on Wednesday after the US released strong consumer price inflation data, with the index rising to a high of 94.42 points and well above this week’s high of 93.88 points.

US dollar rises after inflation data

Consumer prices in the US rose at the fastest pace in more than 30 years with energy prices continuing to rise and supply shortages continuing.

According to the Bureau of Statistics, the Consumer Price Index rose 6.2% on an annual basis during the month of October, marking the highest level since 1991. It is also higher than the average estimate of 5.8% by economists. The CPI rose 0.9% on a year-over-year basis. Monthly.

Meanwhile, core CPI excluding food and energy prices rose from 4.0% in September to 4.6% in October, a figure that was better than the average estimate of 4.3%.

These numbers mean that Americans are paying a much higher price for most of their basic needs, for example, Gasoline prices have jumped to more than $4 a gallon in some states like California.

This rise in prices is attributed to several things, the most important of which is the rise in the price of crude oil to its highest level in more than 7 years, and this comes after OPEC Plus maintained a policy to increase supplies at a relatively slower pace, in the meantime, natural gas prices remained under pressure due to Ongoing Russian controls, coal prices have also jumped sharply as companies slow in production and investment due to climate change policies.

So, with high inflation in the US and low unemployment, the Fed has adopted a relatively hawkish tone, and the Fed has already started it as it took the decision to cut back on its asset purchases during its last meeting, so with inflation rising there is a chance that it will maintain a hawkish tone.