On Tuesday, at GMT 4:30 a.m., the Reserve Bank of Australia (RBA) will release the official cash rate. It is the interest rate that major Australian banks and financial institutions pay to borrow funds held at the RBA.

Short-term interest rates are the primary factor in the valuation of the Australian Dollar against other major currencies. So, top Forex brokers in Australia pay close attention to any changes in the official cash rate.

The RBA left the cash rate at 0.10% in their last meeting. The forecast for this month is that the RBA will leave it unchanged at 0.10%.

On Tuesday, at GMT 9:00 a.m., the Zentrum fur Europaische Wirtschaftsforschung (ZEW) will release its German economic sentiment index. It measures the level of a diffusion index based on surveying 275 German institutional investors and market analysts.

Since the professional investment community, investors, and analysts have the latest data; their reflection about the economy tends to be the most accurate. Therefore, CFD traders consider the ZEW’s German economic sentiment index to be a leading indicator of the entire Eurozone economy. This is because the German economy is one of the most important driving forces behind the Euro currency.

Last month, the ZEW German economic sentiment came out at 79.8. This month, analysts are expecting it to come down to 75.0. 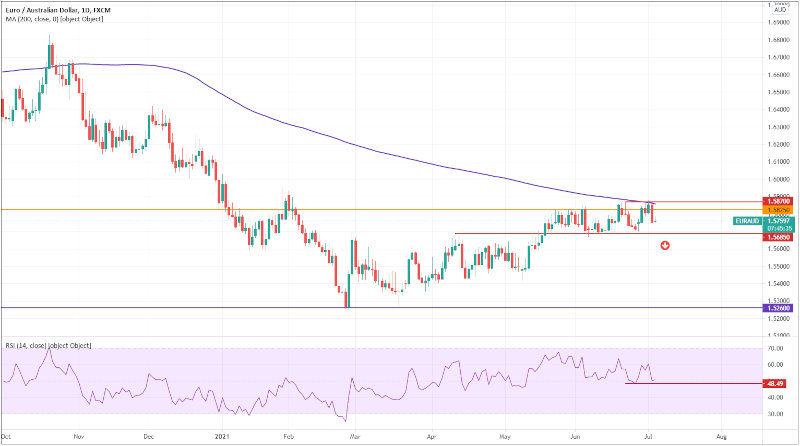 Since the end of February, the EUR/AUD remained bullish. Over the last few months, it climbed up by around 615 pips and found resistance near the 200 periods moving average. Yesterday, it once again tested the resistance near 1.5870 but fell sharply. Currently, it is trading just below the resistance around 1.5825 about to test the support near 1.5685.

The Australian overnight cash rate will likely remain at 0.10%. However, the German ZEW Economic Sentiment for the Eurozone will likely come down to 75.0. We believe it would set a bearish fundamental outlook for the EUR/AUD this week. Therefore, if the EUR/AUD closes below the support near 1.5685, it would likely attract additional bearish momentum in the market.

Hence, CFD traders should look out for trading opportunities below this major support level near 1.5685.