On Tuesday, at GMT 10:00 a.m., the Zentrum fur Europaische Wirtschaftsforschung (ZEW) released its German economic sentiment index. It measures the level of a diffusion index based on surveying 275 German institutional investors and market analysts.

Since the professional investment community, investors and analysts have the latest data; their reflection about the economy tends to be the most accurate. Therefore, CFD traders consider the ZEW’s German economic sentiment index to be a leading indicator of the entire Eurozone economy. This is because the German economy is one of the most important driving forces behind the Euro currency.

Last month, the ZEW German economic sentiment came out at 22.3. This month, analysts were expecting it to come out at 20.3. However, the actual figure came out much higher, at 31.7.

On Wednesday, at GMT 1:30 p.m., the US Bureau of Labor Statistics will release the month-over-month consumer price index. It measures the changes in the price of products and services bought by American consumers over the past month.

Forex traders consider the US CPI to be the most important fundamental indicator to measure the inflation in the economy. This is because the Federal Reserve also uses the CPI to decide about setting future overnight interest rates. Hence, a rising CPI signals to the Forex market that there would be an increase in the future interest rates. 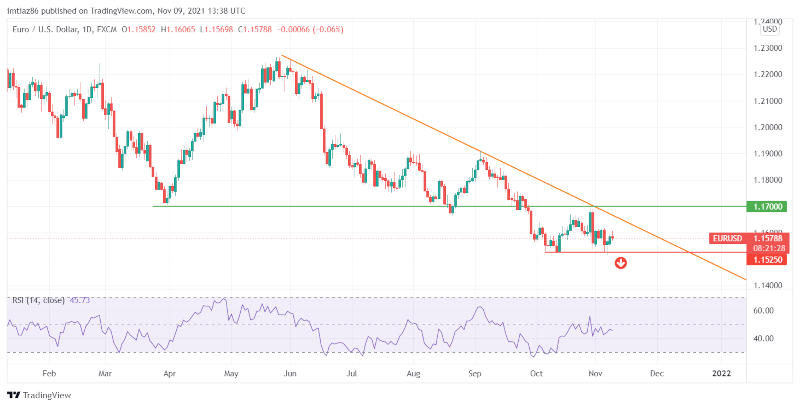 Since the end of May 2021, the US Dollar remained relatively strong compared to the Euro. Over the last several months, the EUR/USD has fallen by nearly 6% or 740 pips. At the end of October, the EUR/USD started a bullish retracement and tested the confluence zone of the downtrend line and the resistance near 1.1700. However, it failed to gather ample momentum near the 1.1700 level and resumed the downtrend. Last week, it fell to retest the support near 1.1525. Currently, it is trading just above this major support level.

The German ZEW Economic Sentiment unexpectedly went up from 22.3 to 31.7. On the other hand, analysts are expecting the US consumer price index to increase by 0.6% over the last month compared to a modest 0.4% in the previous month. High inflation has prompted the Federal Reserve the start reducing its asset purchase program soon. An additional increase may increase the likelihood of a rate hike sooner than expected. We believe it would set a bearish fundamental outlook for the EUR/USD this week. Therefore, if the EUR/USD closes below the support near 1.1525, it would likely attract additional bearish momentum in the market.

Hence, CFD traders should look out for trading opportunities below this major support level around 1.1525.