On Tuesday, at GMT 6:30 a.m., the UK’s Office for National Statistics released the public sector borrowing figure. It measures the difference in the value of the spending and income of the public corporations as well as the central government of the UK and other local governments during the last month.

On Friday, at GMT 1:45 p.m., the Markit will release the US Flash Manufacturing PMI data. It measures the level of a diffusion index based on surveying around 500 purchasing managers in the country.

Forex traders consider the Flash Manufacturing PMI figure to be a leading indicator of the American economic climate. Because purchasing managers usually have insight regarding business conditions such as employment, production capacity and new bulk orders and inventory situation.

Last month, the US Flash Manufacturing PMI figure came out at 49.8. The forecast for this month is currently set at 52.0. 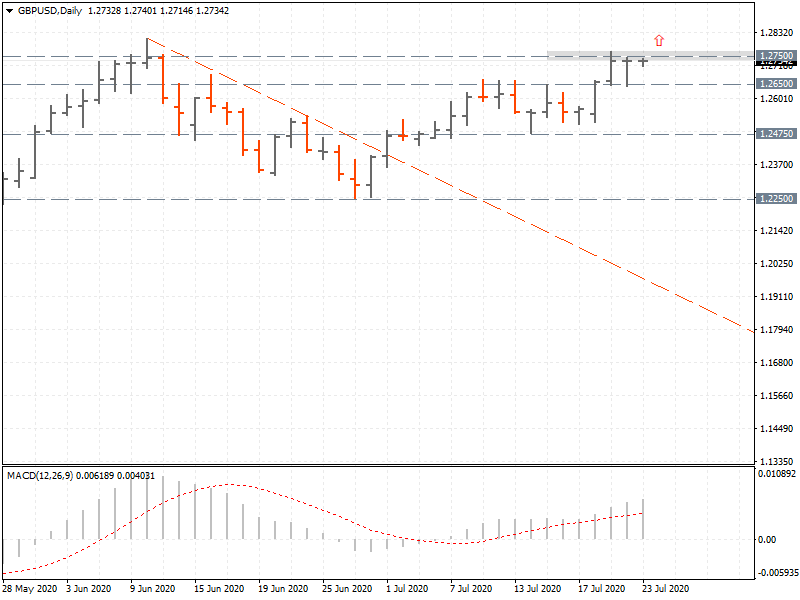 The GBP/USD broke above the downtrend line on July 1, 2020. Over the last few weeks, it remained bullish. Consequently, the pair climbed up by around 280 pips. This week, it broke above the resistance near the 1.2650 level. However, yesterday, the GBP/USD once again tested the support near 1.2650 but failed to penetrate below it. Currently, it is trading near this key pivot zone around 1.2750 level.

The US Flash Manufacturing PMI would likely improve over the last month to 52.0. On the other hand, analysts were expecting the UK’s Public Sector Net Borrowing to come down significantly and it did. We believe it would set a bullish fundamental outlook for the GBP/USD this week. Therefore, if the GBP/USD closes above the resistance near 1.2750, it would likely attract additional bullish momentum in the market.

Hence, forex traders should look out for trading opportunities above this major resistance level around 1.2750.