GBPUSD extends its gains for the third day in a row

GBPUSD continued to achieve gains in the morning of Friday’s trading in the European market and recorded the third consecutive daily rise to trade near its highest level in three weeks. 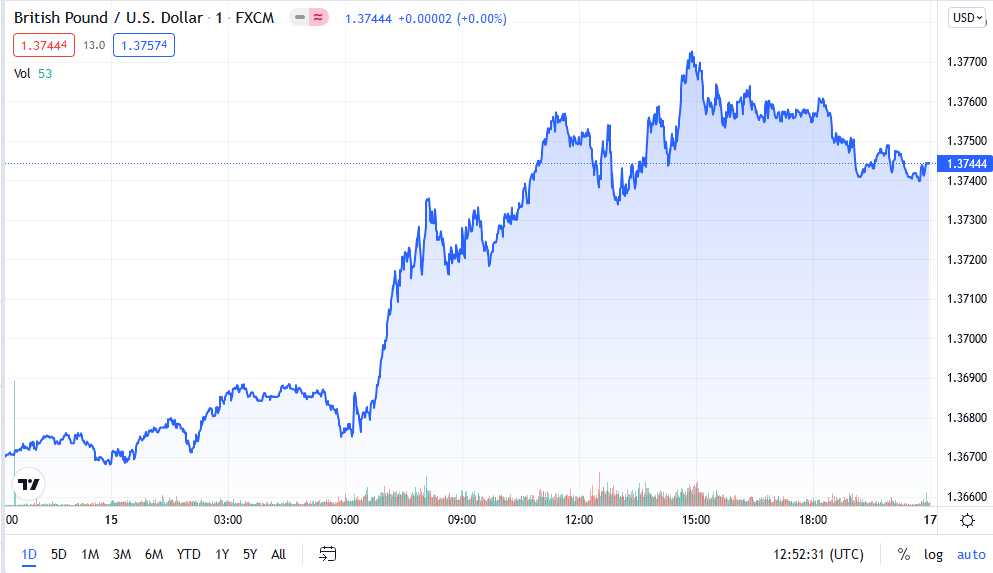 The GBPUSD pair traded at the level of $1.3728, adding about 0.4% from the opening level of today’s session at $1.3672. The pound closed yesterday’s trading, achieving a 0.1% rise against the US dollar for the second day in a row, and recording its highest level in three weeks at 1.3734 The British pound is heading towards recording the second consecutive weekly rise, with gains that may reach about 0.8%, amid increasing expectations that the British Central Bank will head towards tightening its monetary policy soon.

US retail sales in focus

The United States published strong economic numbers this week. On Wednesday, the Bureau of Labor Statistics (BLS) released strong inflation data, as figures revealed that the rate of consumer price inflation in the United States rose to 5.4% during the month of September after rising by 5.3% in the previous month.

On Thursday, data on the labor sector showed that the number of Americans filing initial jobless claims fell sharply last week, and initial claims fell to 293 thousand from 329,000 in the previous week, and continuing claims fell from 2.7 million to 2.5 million, recording the lowest level since the beginning of the year. Coronavirus pandemic.

The next major catalyst for the EUR/USD will be the latest US retail sales figures due on Friday, the figures are expected to show that retail sales fell in September as consumers avoided higher prices and wages did not match the higher cost of items.

Economists expect the data to show that retail sales will decline by 0.7% in September after rising by 0.7% in August, and they also expect core retail sales to decline from 1.8% to 0.5%.