GBPUSD extends its losses to its lowest level in three weeks

GBPUSD extended its losses on Tuesday morning in the European market, and recorded the third consecutive daily decline, to reach its lowest level in three weeks. In the United States and Britain, where expectations are high that the Federal Reserve is heading towards tightening its monetary policy, the Bank of England is unlikely to do the same during its next meeting next Thursday. 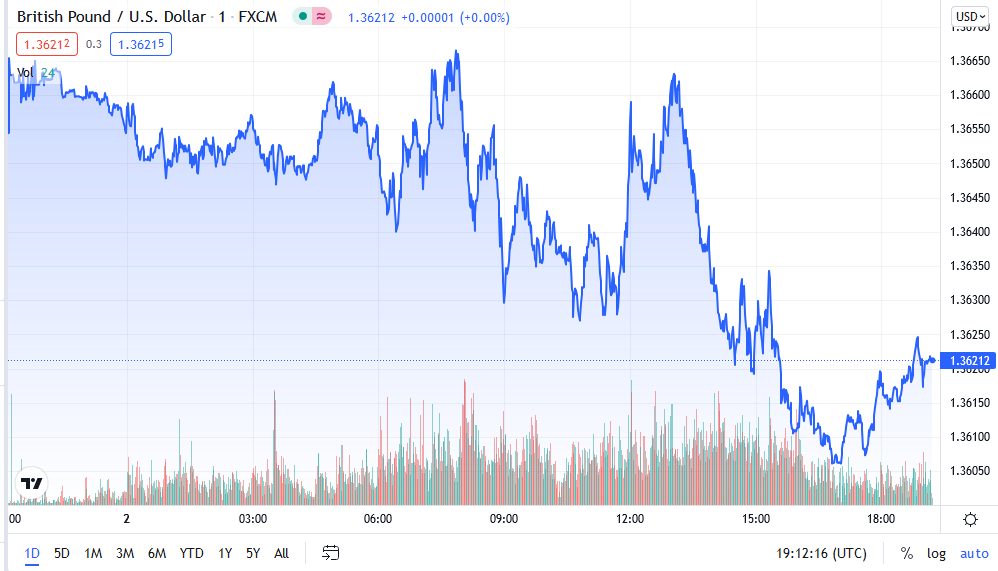 The GBPUSD pair traded at $1.3639, the lowest since last October 13, losing about 0.15% from the opening level of today’s session at $1.3659, and by the end of yesterday’s trading, the pound sterling lost about 0.15% for the second day in a row, in light of the increasing Intensity of disputes between France and England over fishing rights.

The US dollar rises before the Federal Reserve meeting

The US dollar witnessed a rise against a basket of major currencies in the morning trading on Tuesday, resuming its gains that stopped yesterday, to trade near its highest level in three weeks, and the markets are awaiting the results of the Federal Reserve meeting, which will meet later in the day to issue its decisions tomorrow is Wednesday.

The index rose to its highest level since October 13 at 94.30 points last Friday, following data published on Friday, which showed that the US personal consumption expenditures index jumped to 4.4% in September, the highest level since 1991, personal consumption expenditures is an important figure Because it’s the Fed’s preferred inflation measure.

At the same time, data showed that personal consumption continued to improve as consumers spent their savings, the data came a day after relatively disappointing US GDP data, as figures revealed that the country’s economy rose by only 2.0% in the third quarter, down sharply from the reading The previous one recorded a reading of 5.7%.

The dollar index will be in focus this week for two main reasons. First, the Federal Reserve will start its meeting on Tuesday and then publish its report on Wednesday. Analysts expect the central bank to become relatively hawkish at this meeting. Besides, inflation in the country has jumped sharply while declining. Unemployment rate.