GBPUSD continues to rise despite the strength of the US dollar

GBPUSD continued to achieve gains in the morning trading on Tuesday in the European market and recorded the second consecutive daily rise. 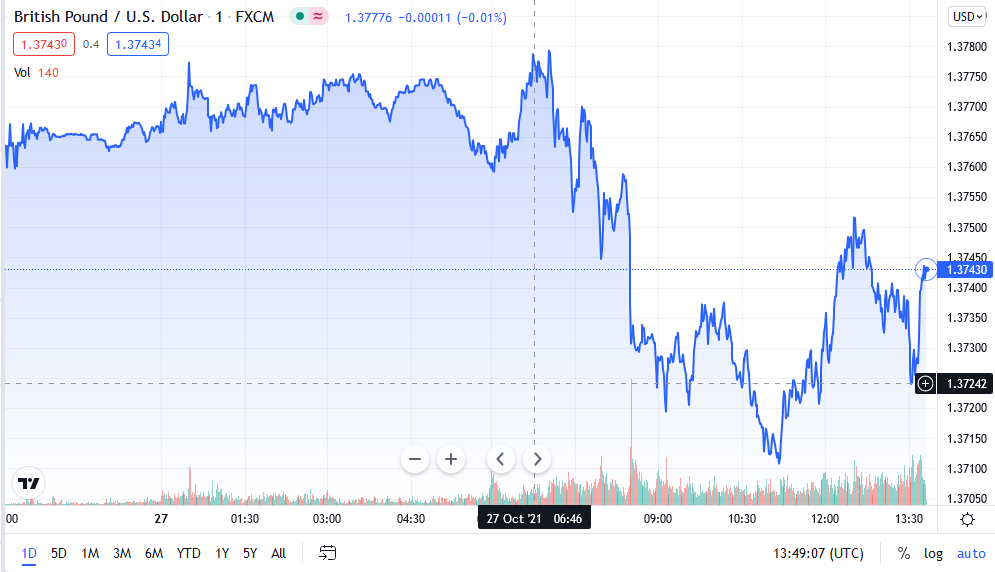 The GBPUSD traded at the level of $1.3788, adding about 0.2% from the opening level of today’s session at $1.3765, and the British pound closed yesterday’s trading, achieving an increase against the green currency by about 0.1% in the first daily rise.

It is expected that the monetary policymakers of the British Central Bank will meet on November 4 to set the appropriate monetary policies for the economic situation at the present time, and most expectations indicate that the Bank will make a decision to reduce its stimulus program in the first step towards further monetary tightening, this comes in conjunction with the increasing inflation rates.

The US dollar index returned to rise in the evening session before the release of the latest US consumer confidence data, and the index also rose after hints that the Federal Reserve will begin to reduce its asset purchases at the next meeting, it is trading at 93.90 points, slightly above its lowest level recorded this month at 93.50 points.

US dollar receives support ahead of confidence data

The US dollar rose after the Wall Street Journal reported on the November meeting of the Federal Reserve, where the newspaper revealed that the President of the Bank, “Jerome Powell” has settled to start reducing asset purchases. At this meeting, the bank will begin to reduce these asset purchases by about 15 billion dollars per month, and the goal is to finish the asset purchases by June of next year.

The price of crude oil jumped after Goldman Sachs said demand has already risen above pre-Covid-19 levels, so investors expect the rally to lead to more inflation in the US and around the world.