GBPUSD is heading for its biggest monthly gain this year

GBPUSD witnessed a decline at the beginning of the week’s trading and recorded its second consecutive daily loss in light of the continuing correction and profit-reaping operations, and despite this decline, the British pound is heading towards the second consecutive monthly rise as it will be The biggest of the year, those strong gains cursed by the weakening of the US dollar along with growing expectations that the Bank of England will raise interest rates sooner than expected.

The GBPUSD pair traded at $ 1.4163, down by more than 0.1% from today’s opening session at $ 1.4180, and the pair ended Friday’s trading day, losing 0.15% with corrections’ activity and reaping profits after hitting its highest level in a week at 1.4219 Dollars in earlier trading.

The pound sterling last week recorded its fourth consecutive weekly rise against the US dollar with gains estimated at 0.3%, within the longest wave of weekly gains in 2021, and with the end of today’s trading, the royal currency is heading towards recording the second consecutive monthly rise against the US currency with gains that may amount to more than 2.5 % In the largest monthly increase in 2021. 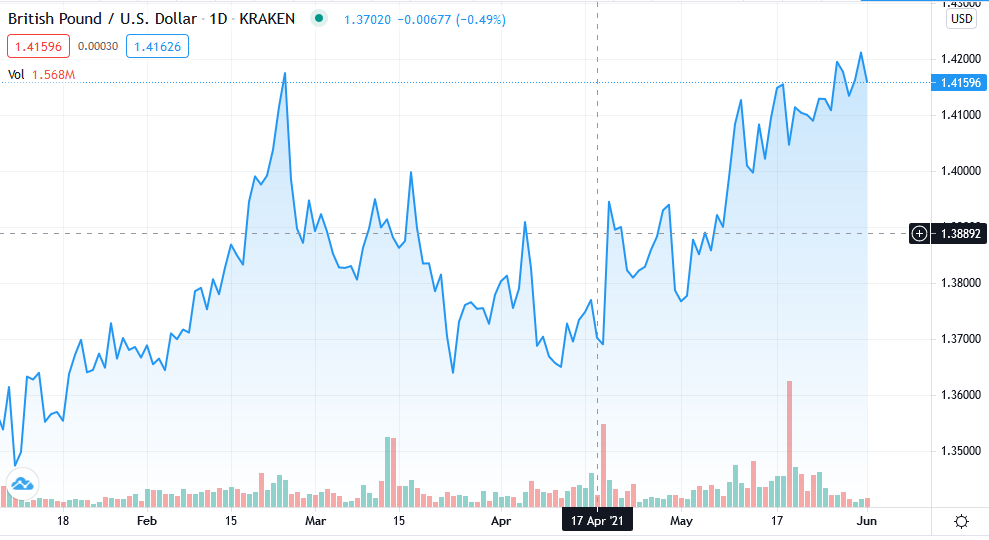 The rise in the sterling pound supported the weakness of the US dollar against most major currencies with diminishing expectations that the Federal Reserve would tighten its monetary policy sooner than expected. In addition to optimistic economic data for the British economy, which indicates a faster than expected recovery from the damages of the Covid 19 pandemic, which may The Bank of England is being forced to tighten monetary policy over the next year.

The US dollar achieved a limited rise against a basket of major currencies, and this comes in light of the mixed US dollar sentiment, which remains in a continuous state of flux with the intensification of the controversy over inflation in the United States.

On Friday, personal consumption expenditures data in the US reported an increase in prices of 0.7% for April from 0.4% in the previous reading, with the annual rate increasing to 3.1% from 1.9%, marking the strongest reading since mid-1992.

The data will inevitably increase the debate about inflation in the US and the potential effects on monetary policy, especially as this number is the preferred Fed inflation indicator.