Gold prices fell during today’s session in the European market, after yesterday recording a record high above the psychological barrier of 1900 dollars an ounce for the first time in eight months, in light of the increased purchases of safe-haven assets due to the exacerbation of political tension between Russia and the West over Ukraine, but what pressured Prices and pushed them to decline today, the release of the minutes of the last meeting of the Federal Reserve, “the US Central”, which reinforced expectations about tightening monetary policy in the United States. 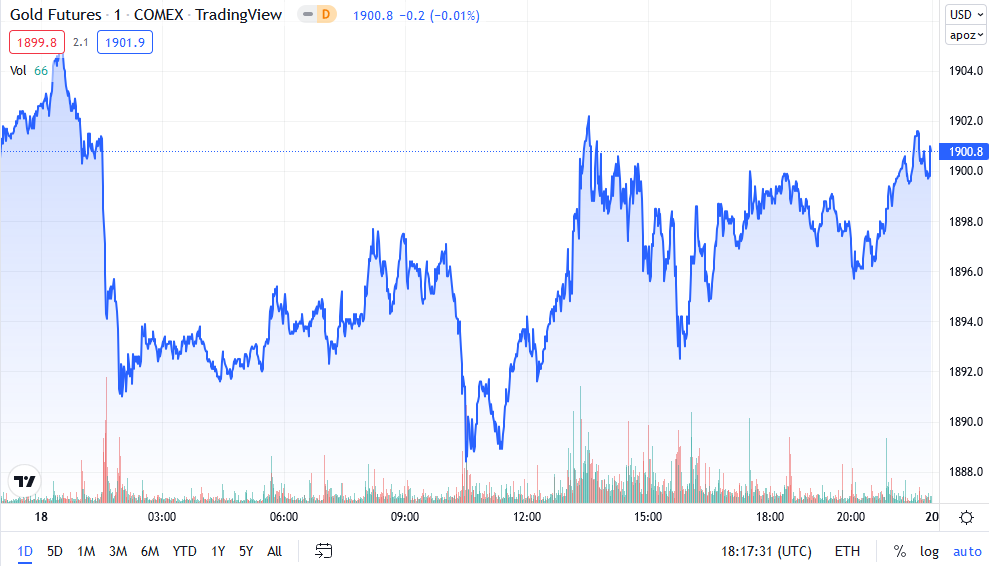 It is noteworthy that the precious metal “gold” had ended trading yesterday, Thursday, up by 1.5%, in the second daily gain in a row, to trade above the important psychological barrier of $1900 an ounce, as prices received more support recently thanks to the increased purchases after the exacerbation of the Russian-Ukrainian crisis.

For the same reasons, gold prices are heading towards recording a net weekly gain, the third in a row, as it is still high so far, with an average of 1.8%.

Developments of the Ukrainian crisis

Russia-backed separatists in the disputed Donbas region have accused Ukrainian forces of using mortars to attack their territory in violation of agreements aimed at ending the conflict, the RIA news agency said Thursday.

This years-long conflict with the Donbas rebels may inflame political tensions between the West and Russia, with Russia massing more than 100 troops near the Ukrainian border, and the West threatening Moscow with economic sanctions if it invades Ukraine.

Earlier this week, the United States said Russia could create a sudden pretext at any time to invade its neighbor Ukraine, and German Chancellor Olaf Scholz warned against imposing sanctions on Russia if it launched an attack.

For its part, Moscow responded that in the event that its security demands are not observed through dialogue, it is ready for military and technical measures to ensure its national security, which many consider a clear threat to invade Ukraine if the United States does not accept those demands, which include not expanding NATO in Eastern Europe. , and the non-acceptance of Ukraine’s membership as a country in NATO.

Returning to trading in precious metals other than gold, silver fell by about 0.2% to the level of $23.80 an ounce, and palladium lost 0.7%, and both are preparing to achieve small weekly gains.

While platinum increased by 0.3%, it is heading towards achieving its best weekly performance since June 2021.