On Monday, at GMT 9:30 a.m., the Markit released the United Kingdom’s final manufacturing purchasing managers’ index (PMI) figure. It measures the level of a diffusion index by surveying around 600 purchasing managers in the country.

The PMI is calculated based on survey questions covering employment, production, and price levels. It also takes new order situations as well as inventory conditions under consideration. Businesses are the first to react to changing economic climate. Hence, binary options traders consider this data to be a leading indicator of the overall economic health of the country.

Last month, in January, the UK’s final manufacturing PMI came out at 49.8. The forecast for February was set at 49.8 as well. However, the actual figure came out much better, 50.0.

On Tuesday, at GMT 3:30 a.m., the Reserve Bank of Australia (RBA) will release the official cash rate. It is the interest rate that major Australian banks and financial institutions pay to borrow funds held at the RBA.

Short-term interest rates are the primary factor in the valuation of the Australian Dollar against other major currencies. So, binary options investors pay close attention to any changes in the official cash rate.

The RBA left the cash rate at 0.75% in their last meeting. The forecast for this month is that the RBA will reduce the cash rate to 0.75% 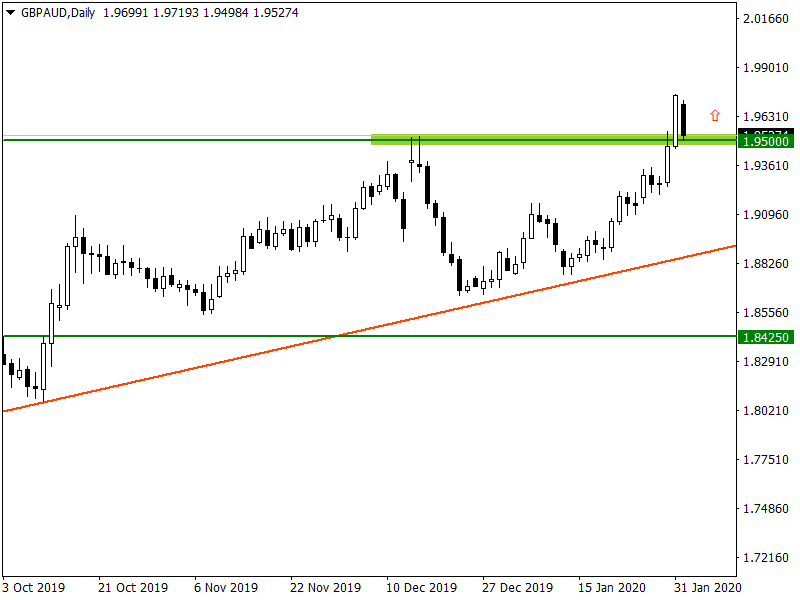 The GBP/AUD formed a bullish pin bar on July 30, 2019. Over the last seven months, it remained bullish and climbed up by around 2000 pips. Last week, it broke and closed above the resistance near 1.9500. Earlier today, the GBP/AUD went back to test the 1.9500 level as it has turned into a support.

The Australian overnight cash rate will likely to remain unchanged at 0.75%. On the other hand, the UK’s final manufacturing PMI came out slightly better than last month, at 50.0. We believe it would set a bullish fundamental outlook for the GBP/AUD this week. Therefore, if the GBP/AUD remains above the support near 1.9500, it would likely attract additional bullish momentum in the market.

Hence, Australian binary options traders should look out for trading opportunities above this major support level around 1.9500.